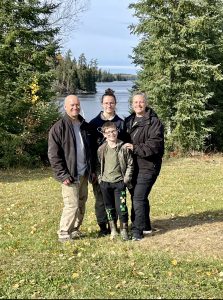 Jim and Jillian are not only the owners of Black Bear Lodge, but also long time guests.  They have been going to Black Bear Lodge since 1984 (Jim) and 1997 (Jillian).  Jim and Jillian even spent their honeymoon at BBL in 2004.  They took over the camp in the summer of 2006 and have now made Red Lake, Ontario their summer home.

Jim and Jillian were both born and raised in a Northwest suburb of Chicago.   In 2003 they moved to Kalamazoo, MI where they lived for 12 years, and have now resided in Taylorsville, KY for the past 7 years.

Jim has coached gymnastics for a private club for 37 years.  Jillian retired this year after also coaching for 27 years.  Jillian is also an Independent Norwex Consultant and loves to share with others how to clean their house, cars, pets, and selves without using chemicals so they can have a safer, healthier, life while saving money.  Jim and Jillian have been homeschooled their children starting in 2013.  They are no stranger to hard work and busy lives.

In April of 2009 Jim and Jillian gave birth to their daughter, Josie.  Josie is no stranger to Black Bear Lodge as she was only 10 days old when she made her first trip to camp.  Jeremiah was born in November of 2012.  He enjoyed his first summer at camp when he was 6 months old.

As owners of Black Bear Lodge, Jim and Jillian aim to preserve the history and tradition of the camp as it has been for over 70 years – with its breath taking scenery, abundant wildlife, and exceptional fishing and hunting.  Black Bear Lodge has become a special place for many people from across the Nation.  It is Jim and Jillian’s commitment to continue to offer a true wilderness experience for all of their guests.